At least 100 people have been confirmed dead, over 4000 injured, and many missing from a massive Beirut explosion, in Lebanon on Tuesday, the 4th of August, 2020. The explosion was said to have occurred in a warehouse that was housing highly explosive materials. President Michel Aoun has confirmed that the Beirut explosion was caused by Ammonium Nitrate.

A huge mushroom cloud can be seen in the videos posted all over the internet with helicopters flying over the blast area spraying water in a bid to stop the blazing fire caused by the explosion. Fire service, humanitarian, and health workers are currently working hard to accommodate the number of casualties recorded so far.

Eyewitnesses have reported that they suddenly lost their sense of hearing followed by glasses shattering, buildings shaking, and a loud blast sound that caused serious fear, screams, and panic. The aftermath of the explosion can be seen over the sky. 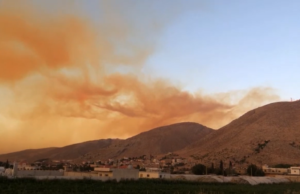 President Michel Aoun has confirmed that the Beirut explosion was caused by 2,750 tonnes of Ammonium Nitrate that was kept in a warehouse for six years without adequate safety measures in place. He expressed displeasure over the unfortunate incidence and vowed that those responsible will pay the price. He has declared three days of national mourning starting from Wednesday, the 5th of August, 2020 in Beirut, and called for an emergency cabinet meeting.

Blast damage extends over half of the entire city with up to 3,000 left homeless. The cost of the damage is said to be estimated at $3bn. President Michel Aoun has called for a £50.5m emergency fund to help ease the impact of this deadly explosion.

Devastating Impact of the Beirut Explosion

The Red Cross in Beirut has revealed that over 100 persons have died and about 4,000 wounded as a result of the explosion.  Many people are still trapped under the ruins of the blast with rescue services using every means they can, including boat services, to rescue people. Search and rescue missions are still ongoing with rescuers sifting through the rubbles to find survivors or bodies. Firefighters are tackling numerous blazes while medical professionals are trying to treat patients arriving by the minute. It is a race against time! There are reports that the blast was felt hundreds of kilometers away in Cyprus and their clouds covered with smoke.

Lebanon’s Health Minister Hamad Hassan said Tuesday’s explosion that killed at least 100 people and wounded 4,000 added to the country’s health care system crisis as it has already been struggling with the impact of the Covid-19 pandemic.

“It requires everyone to engage positively from politicians, political parties, authorities, and from all friendly and brotherly countries because we suffer from a shortage in the number of beds and a lack of equipment to help injured people and those are in critical conditions,” Hassan added.

Images and videos from the aftermath of the explosion show homes destroyed and partly covered with shattered glass and debris.

Beirut’s governor Marwan Abboud said in an interview that at least 300,000 people have been displaced from their homes by Tuesday’s devastating explosion. “There are more than 300,000 Lebanese citizens unable to sleep in their own homes,” Abboud said during the telephone interview. “Half of Beirut’s population have homes that are unliveable for the foreseeable future — for the next two weeks.”

The state capital of Lebanon, Beirut, has experienced a period of unrest in time past and is currently going a period of economic crisis. This terrible explosion comes amidst a political tension in Lebanon causing street protests against the government’s handling of the worst economic crisis since the civil war as well as the devastating impact of the Covid-19 pandemic.