Vice President Joe Biden’s wife, Jill Biden, is a mother, grandmother, accomplished educator, and an active member of her society. Her work as the second lady during the Obama administration bothered on accentuating the importance of community colleges to America’s future, raising awareness around areas of relevance to women, especially breast cancer prevention, bringing attention to the sacrifices made by military families all by being consistent with her English full-time teaching job at a community college in nearby Virginia.

Jill Biden, a military mom, has a firsthand understanding of how difficult it can be to have a loved one deployed overseas.  In Delaware, she was active with a nonprofit organization called Delaware Boots on the Ground, aimed at helping families in times of military deployment by organizing community events to raise awareness and support.

Jill Biden is a doctor and earned her Doctorate in Education from the University of Delaware in January of 2007. She has been an educator for more than three decades. Prior to moving to Washington, D.C., she taught English at a community college in Delaware, a public high school and a psychiatric hospital for adolescents. Dr. Jill’s dissertation centered on maximizing student retention in community colleges. She also has two Master’s Degrees — both of which she earned while working and raising a family. 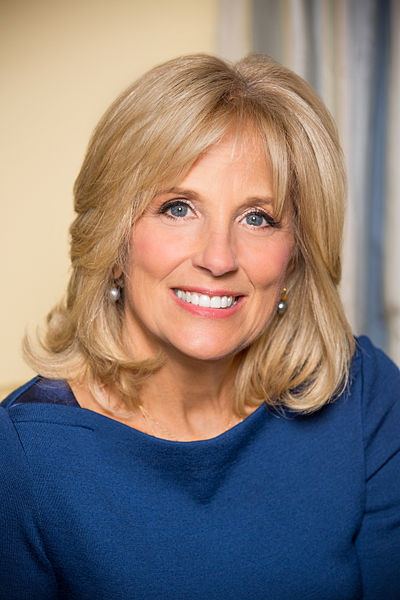 Joe Biden, Dr. Jill Biden’s husband is officially the Democratic candidate for U.S. President in 2020. Many people are quite familiar with Joe, given that he was the former Vice President of the United States, but might not know much about his family, including his wife, Jill Biden.

Dr. Jill Biden is Joe’s second wife. His first wife was his college sweetheart, Neilia Biden. Neilia and the couple’s 1-year-old daughter, Naomi, were killed a few days before Christmas in 1972 when a tractor-trailer slammed into their station wagon. Biden’s sons Beau and Hunter were severely injured in the crash as well but ended up recovering.

Joe Biden and Dr. Jill Biden met three years after Joe lost his wife and daughter,  when Jill was in school. “She gave me back my life,” Joe wrote in his 2007 memoir Promises to Keep, per O the Oprah Magazine. “She made me start to think my family might be whole again.”

Joe proposed to Dr. Jill Biden five different times before she agreed to marry him, according to Vogue. “I said, ‘Not yet. Not yet. Not yet.’ Because at that time, of course, I had fallen in love with the boys, and I really felt that this marriage had to work,” Jill said. “Because they had lost their mom, and I couldn’t have them lose another mother. So I had to be 100-percent sure.” Joe Biden chimed in saying he actually gave Jill an ultimatum: “‘Look, this is the last time I’m asking you. I don’t care when we get married. But I want a commitment.’ And she said okay. But it took that!”

“What Jill is best at helping me do is figure out who the people around me would be most compatible with me,” Joe Biden said in the CBS profile. “She knows me better than I know me.”

Jill Biden said that they discussed his vice-presidential candidate together. “We’ve talked about the different women candidates, but it’s gotta be Joe’s decision,” she said. “Who he feels most comfortable with, who shares his values. And that’s what he’s always said that’s what he and Barack had.”

Jill Biden who will address the Democratic National Convention on Tuesday night, August 8th, 2020, is playing a far more active role in her husband’s campaign than she has in his past two White House bids, in 1988 and 2008, according to close friends and confidants. Despite the fact that she’s spent eight years in and near the White House, her speech at this virtual convention will most likely serve as a reintroduction to voters — a big moment for the potential first lady, even under the current circumstances.

What kind of first lady would she be though? A hands-on one by all indications. “I think she has a combination of Michelle Obama, Eleanor Roosevelt, and Hillary Clinton,” said Randi Weingarten, president of the American Federation of Teachers, AFL-CIO, noting that all three were passionate about education but the latter two operated in the foreground, while Michelle seemed more comfortable asserting her power behind the scenes. It seems like Jill Biden would be a far more public and active first lady than Melania Trump.

Please feel free to let us know if this article has helped you know more about Dr. Jill Biden. Drop a comment below:

How to Cook Jollof Rice